OTHER SONGS YOU MAY KNOW: Metalheads probably know this whole record

WHAT’S IT ALL ABOUT: Instead of moving forward, or solidifying their progress, Pantera takes a step back artistically even though they capitalize commercially.

SOME WORDS, PHRASES AND CLAUSES ABOUT THIS RECORD: The leap to Vulgar Display of Power from their previous records was a large one, and one hoped that Pantera would keep at that same level, or even move forward. 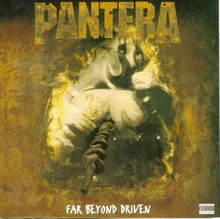 It’s not to say that Far Beyond Driven isn’t a good record. It is, but it’s disappointing as it seems recycled and some of the songs lyrics, while meaning well, just don’t go anywhere or move anyone.

The only notable song is their cover of “Planet Caravan”, which made for a great change-up. Unfortunately it was at the end, while most of the record was the same pounding metal. This is why sequencing is important.

NOTES & MINUTIAE: The original artwork was replaced quickly, but was released in Australia and New Zealand and on re-issues.

IS THERE A DELUXE VERSION: A Japanese bonus track and a live CD.

GRADE: B:  They went a bit backwards, while getting more popular