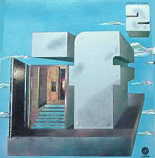 SINGLES: Your City Is Falling

OTHER SONGS YOU MAY KNOW: No

WHAT’S IT ALL ABOUT: Still more jazz than rock, the UK combo’s second album pleased fans, but didn’t break them any new audiences.

SOME WORDS, PHRASES AND CLAUSES ABOUT THIS RECORD: The members of If were skilled jazz musicians. Their first album really leaned heavily on jazz, but their second adds a little more rock into the mix (thanks to a more out front guitar sound), and vocalist JW Hodkinson is a little more prominent.

Still, though, this is more for jazz fans who want to rock out a little bit. Again, it’s better, and more exploratory, than some of the more popular jazz-rock bands of the time, but the songs aren’t really radio ready, and that limited their audience to those who appreciated the musicianship.

It’s a bit better than album one, if only that the songs are more ‘song’ like. Your appreciation for this will be how much you enjoy getting rock music in your jazz.

NOTES & MINUTIAE: The single received a “Special Merit Spotlight” in Billboard, calling it a potential crossover hit. It didn’t hit.

GRADE: B:  Non-fans of jazz may not be excited about this, but it’s a good representation of how jazz can adapt rock motifs.