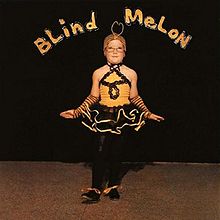 OTHER SONGS YOU MAY KNOW: Probably not.

WHAT’S IT ALL ABOUT: Not really grungy, not really all the way hard rock, but successful because of their tangential connections to those scenes.

SOME WORDS, PHRASES AND CLAUSES ABOUT THIS RECORD: Shannon Hoon was friends with Axl Rose, and followed him out to California from Lafayette, Indiana and formed a band with some musicians he met from Mississippi.

Not a true hard rock band like Rose’s Guns ‘n’ Roses, Blind Melon had more of a folky feel led by Hoon’s shrieking vocals. Their sound hit many of the popular notes of the time and were kind of lumped into grunge thanks to the industry, yet their album seemed bloated with several tracks all blending together (that second half, zzzzz), with only “Tones of Home”, the big hit “No Rain” and a couple of others (“Soak the Skin” and “Paper Scratcher”) standing out.

Now they’d probably be lumped in with the jam bands, and that’d probably fit them better.

NOTES & MINUTIAE: Shannon Hoon was a wrestler, and my high school hosted the wrestling sectional and regionals, and I did the PA for them. Hoon was a really good wrestler as I remember, wiry yet powerful. I never forgot that name…

IS THERE A DELUXE VERSION: Yes, anniversary editions, etc.

GRADE: B-: I frankly don’t recall much about the last six songs on the record, which means that they probably lumped too many tracks on here.