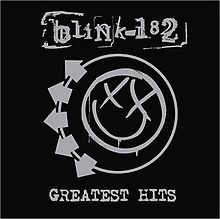 OTHER SONGS YOU MAY KNOW: If you knew more, you wouldn’t need a comp

LINEUP: Mark Hoppus, Tom DeLonge, Travis Barker. Scott Raynor drummed on their first two albums and you can tell why they 86’d him.

WHAT’S IT ALL ABOUT: Power pop punk was a hit making machine for a few years in the early 2000’s, but in retrospect were just a bit derivative and vapid.

SOME WORDS, PHRASES AND CLAUSES ABOUT THIS RECORD: One notable thing about this collection is that it doesn’t ignore their two pre-hit albums. You hear right away the germination of their sound, and why they had to get rid of their original drummer.

But that sound, a power-pop crossed with punk hybrid with lyrics about early 20’s angst, was only good when they had hooky choruses that almost made you forget that some of the lyrics were hackneyed. As they grew more ambitious, and branched for a few chords and a hook, they got less interesting. When they stayed in their lane, it seemed like they were constrained and just repeated themselves. Their limitations boxed them in.

Yet it’s not without its charms. Blink-182 had a lot of charisma and fun in them and on occasion they satisfy. But over a long collection, their flaws become more apparent.

NOTES & MINUTIAE: This was released after their first breakup. Since rock never dies, they’ve been reunited a couple of times.

IS THERE A DELUXE VERSION: This is one of two collections. The later stuff isn’t compiled, yet, and it doesn’t seem it would enhance anything. There are bonus UK and Japanese tracks for this, though.

GRADE B: A collection like this is probably your safest bet for the Blink-182 experience overall. Still, it feels like you’re hearing either the same song over and over, or a different band that doesn’t know how to vary from a sound. 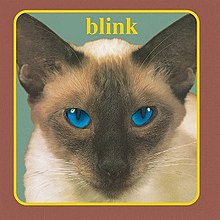 OTHER SONGS YOU MAY KNOW: If you wrote the Blink 182 Wikipedia pages, yes.

WHAT’S IT ALL ABOUT: San Diego punks embrace poppier motifs and run it into the ground.

SOME WORDS, PHRASES AND CLAUSES ABOUT THIS RECORD: Blink-182’s fan base in San Diego and related areas were large enough to get some demos released and distributed, and Cargo Records signed them. They wrote some newer tracks and reworked some and released this onto the public.

While this was a few years before they hit the mainstream big-time, the elements were all here. Punk sounds with poppy melodies, and in many cases, puerile and ‘humorous’ lyrics. At times, the tempo is a bit too fast to squeeze in all of the words without rushing over them. The tracks also, after a while, don’t sound unique at all – fast tempo, kinda spoken words about some injustice for teenagers or other, similar chords.

The lyrics wreck a few songs for me – they definitely sound ‘bro’ and firmly rooted in freshman high school boys’ mentality. I exiled a lot of those.

NOTES & MINUTIAE: The Wikipedia sites for the Blink-182 albums and demos are larger and more detailed than almost every other album Wiki site, and the prose is definitely more fawning over the band, especially for a record that has a lot of puerile throwaways.

GRADE: C: Oh, sure, there are some decent pop-punk songs, but man there are some ‘funny’ lyrics that should make anyone over 15 squirm. Plus, the songs all begin to sound alike.