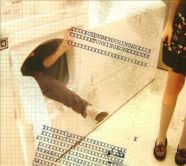 OTHER SONGS YOU MAY KNOW: None

WHAT’S IT ALL ABOUT: Home brewed recordings that turned into a legit band, later.

SOME WORDS, PHRASES AND CLAUSES ABOUT THIS RECORD: This is a definite low-fi one man band. The issue with this and many other low-fi home recordings is that they intentionally sound muddied or distorted to the point where the song goes away.

It’s like listening to an album with a pile of dust on the needle.

There are some glimmers here – decent glimmers of songs with melodies. But I couldn’t cut through the muck. You may be able to.

IS THERE A DELUXE VERSION: See above

GRADE: C: Too low-fi for me and my catalog.