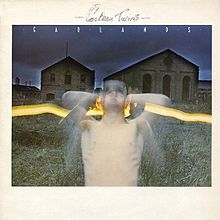 OTHER SONGS YOU MAY KNOW: Are you British? If not, then, probably not.

WHAT’S IT ALL ABOUT: Gothy, moody, atmospheric post-punk sounding like a more melodic, less frenetic Siouxsie and the Banshees.

SOME WORDS, PHRASES AND CLAUSES ABOUT THIS RECORD: Guitar patterns ring out, a bass with an envelope filter burbles throughout, and voice rising above the fray sings in a gentle way. The Cocteau Twins’ first album fit right into the indie gothic space of the UK, but there was something different about them.

It definitely seemed they were interested in sound more than song – not that the songs and tracks aren’t good, but they set about sculpting them from sound, anchored by Heggie’s bass and the drum machine. Guthrie’s vocals rise to the top yet also blend well with the Guthrie’s sounds and distortion from his guitar.

This is a good debut. Had 120 Minutes been around on MTV then, I’m sure they would have been big on that show.

NOTES & MINUTIAE: The original UK cassette had some Peel Session tracks on there.

IS THERE A DELUXE VERSION: See above.

GRADE: B+: It sounds ethereal and gothic, and is an excellent representation of that style at that time..