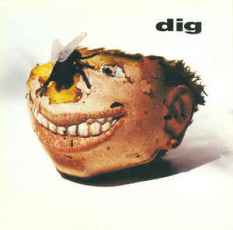 OTHER SONGS YOU MAY KNOW: Nope, not a one

WHAT’S IT ALL ABOUT: “Corporate” Alt-Rock record that tried to emulate everything that suits thought was trendy in the alternative rock circles. Only a couple tracks work.

SOME WORDS, PHRASES AND CLAUSES ABOUT THIS RECORD: Hey kids, let’s make an alternative rock album!

That seems the mode that Dig was in when this album was released. Loud-soft dynamics, sad white boy lyrics, angst galore, guitar riffs everywhere, and somehow a sound that was both polished and rough. Well, sorta rough. But not too rough – gotta get on the radio you know.

There are some good tracks here. “Believe” was an MTV favorite and holds up as a good time capsule for the commercial side of alt-rock. “Tight Brain” has some energy and drive, and didn’t really sound like they were just trying to cash in. Scott Hackwith’s vocals were effective on a couple of tracks, but otherwise he’s trying to split the difference between Scott Weiland and Kurt Cobain.

The end result is an alt-rock product that didn’t fool many people.

NOTES & MINUTIAE: Hackwith was connected, He was a producer (still is) that had worked with Iggy Pop, TSOL, and the Ramones

GRADE C: It’s stuff like this that smothered the alt-rock scene.