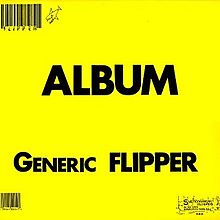 OTHER SONGS YOU MAY KNOW: I don’t think so unless you’re a punk rock historian or lover of the dark and loud.

WHAT’S IT ALL ABOUT: Loud, unconventional punk band releases master work of a first album that’s not for everyone, but should be heard by everyone.

SOME WORDS, PHRASES AND CLAUSES ABOUT THIS RECORD: If you’re looking for sunshine and roses, or even bread and circuses, then this album isn’t for you.

What we have here is a loud album, marked by sheets of guitars by Falconi, pounding drums by DePace, loud, driving bass carrying the riffs, and loud, unsubtle vocals from Shatter and Lose (one played bass while the other vocalized). The subject matter isn’t upbeat at all (“Shed No Tears”, “Ever”, “The Way of the World”, “Life Is Cheap, etc.). I think the whole ethos of Flipper is summed up in the song “Life” (It’s the only thing worth living for…I know it’s got its ups and downs…)

Very much anti-everything, which living in the 80’s could be a definite statement for those on the margins, Flipper’s first album influenced countless punk, hardcore and metal bands going forward. Their shows were confrontational, and so is this album.

NOTES & MINUTIAE: They released a couple of singles before this album, and they’re just as confrontational, topical and loud as this.