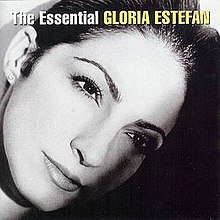 OTHER SONGS YOU MAY KNOW: Maybe so? She has some of her Spanish language hits here.

LINEUP: Gloria Estefan, and whatever incarnation of the Miami Sound Machine was on those records.

WHAT’S IT ALL ABOUT: One of the first Latin crossover artists that made a long-lasting impact in the US and abroad has a compilation stacked with her festive hits and romantic ballads.

SOME WORDS, PHRASES AND CLAUSES ABOUT THIS RECORD: Ever since the Miami Sound Machine made the move to English-language records (after seven Spanish language albums), Gloria Estefan, her husband Emilio, and the band have been a force in European, Latin, and American markets. And while it could be said that the music is formulaic, it is also joyous and memorable.

From 1984 to 1998, Estefan and / or the group had hits in the US or the UK, and still held sway over the Latin charts when she recorded in Spanish. Combining Cuban and Latin American rhythms and flourishes with modern synthesizers and drum machines made their sound unique in the pop markets. The arrangements may be bold and big, but they usually don’t overpower the song or her voice.

This is a large collection, and there’s some stuff that isn’t up my alley, and probably not up yours either. But she deserves a lot more credit than she gets sometimes for being a force in pop and dance music for so many years.

NOTES & MINUTIAE: She survived a huge bus / semi crash in 1990 and was touring ten months later.

IS THERE A DELUXE VERSION: No. There are other comps but this is the most comprehensive.

GRADE A-: You don’t really think about how long she was on top of the game until you start listening to these tracks back to back to back.