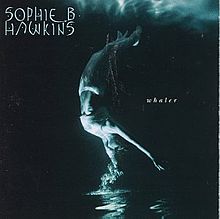 TITLE: Whaler
YEAR RELEASED: 1994
CHART ACTION: #65
SINGLES: Right Beside You (#56), Don’t Don’t Tell Me No, As I Lay Me Down (#6), Did We Not Choose Each Other, Only Love (#49)
OTHER SONGS YOU MAY KNOW: Probably not
LINEUP: Sophie B. Hawkins, Neil Conti, Louis Jardim, Steve Lipson, Peter-John Vettese
WHAT’S IT ALL ABOUT: Second album from Hawkins goes for another hit, finally scores one, but sounds so so dated, almost like an 80’s album.

SOME WORDS, PHRASES AND CLAUSES ABOUT THIS RECORD: The follow up. It’s even harder when you only had one song hit on your debut record. Sophie B. Hawkins faced this dilemma in recording her second album.

For the most part, it sounds like an 80’s relic. Keyboards galore, electronic sounding everything. Hawkins’ voice can be beguiling, but in my ears the material is a bit off and not helped by the dated production. The first single, “Right Beside You” rather much stiffed, for good reason.

She’s still out there – slugging away. I’m just not on the Sophie B. train. I can’t find any compelling reason to listen to the rest of her albums.

NOTES & MINUTIAE: It took almost a year for “As I Lay Me Down” to hit the Top 10. It was also featured in the movie Now and Then.

GRADE: C: There are some decent songs here, waiting to come out wherever they are. The production just kills them for me. EXILED. 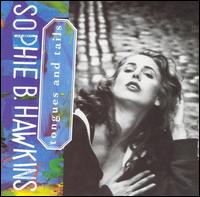 TITLE: Tongues and Tails
YEAR RELEASED: 1992
CHART ACTION: #51 US, #1 US Heatseekers, #46 UK
SINGLES: Damn I Wish I Was Your Lover (#5 US, #14 UK), California Here I Come (#53 UK), Mysteries We Understand, I Want You (#49 UK)
OTHER SONGS YOU MAY KNOW: Nope. Radio didn’t stay on this record.
LINEUP: Sophie B. Hawkins and a lot of studio hands.
WHAT’S IT ALL ABOUT: One single and 10 other songs? Kinda. While it’s got some interesting angles and arrangements, none of the other tracks really catch fire.

SOME WORDS, PHRASES AND CLAUSES ABOUT THIS RECORD: Sophie B. Hawkins’ debut has some interesting production, and the songs aren’t all moon/june/spoon. The hit record has a sound that wasn’t much on the radio in 1992, either. Yet, the other 10 songs are cut from the same cloth without the hooks or the memorable chorus.

Keyboard washes, fretless bass runs, sultry vocals – they’re all there on practically every song. It’s not BAD, but the hit is really all you need.

Part of me wishes that she’d really just go total jazz vocal style on this album – she could definitely pull that off. These songs just lay there in all of their pretty packing.

NOTES & MINUTIAE: “I Want You” is the Dylan song. She covered it in a similar arrangement to the other songs on the record.

GRADE: C+: If you must, it’s good chill out kind of music, but there’s nothing remarkable but the hit. Damn.