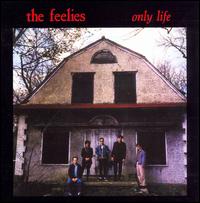 OTHER SONGS YOU MAY KNOW: They cover What Goes On by the VU

WHAT’S IT ALL ABOUT: A major label record, but the Feelies don’t really change up anything. And that’s just peachy.

SOME WORDS, PHRASES AND CLAUSES ABOUT THIS RECORD: The band’s biggest influence was the Velvet Underground, and the title track definitely is of a piece of later-period VU with Glenn Mercer’s voice having a definite Lou Reed vibe. They also cover “What Goes On” by Reed and company as the album ender, so the VU is a big part of this album.

Not everything specifically apes the Velvets. Many tracks are back to the gentle jangly strumming plus guitar solo of The Good Earth, with more emphasis on song than on mode. (The guitar solos are the secret weapon – not really distorted but not exactly clean, either). Tracks like “For Awhile” and “The Undertow” show some growth in songcraft, while maintaining their signature sound. They also use secondary percussionist Dave Weckerman to great effect on many tracks.

One thing about the Feelies is that they’re consistent. Their first three albums deliver exactly what the listener expects.

NOTES & MINUTIAE: The title track is used as the theme of a podcast by the Harvard Business Review.

GRADE A-: Solid album that solidified the Feelies’ place in college and alternative rock.

OTHER SONGS YOU MAY KNOW: Maybe “On the Roof” if you paid attention to college radio in 1986

WHAT’S IT ALL ABOUT: Reconstituted band releases a jangly though mysterious album that unfolds its wonders over multiple playings.

SOME WORDS, PHRASES AND CLAUSES ABOUT THIS RECORD: At first, most of The Good Earth seems like college radio background music from 1986, with restrained vocals, plenty of rhythm guitar and tasteful interplay between drums and bass. The occasional guitar solo broke through but most of it was nice and unobtrusive.

But after a few playings, this album becomes something different. The vocals act as another instrument, while the guitars chord changes and patters interlock seamlessly. It’s not as bright as other albums from the time, but it’s not depressing by any means. Hearing Weckerman and Demeski on percussion interact with the songs is a highlight, and the build up of “Slipping (Into Something)” is well worth the wait, with a restrained lead line and interesting changes.

It probably won’t win many new converts to the cult of the Feelies, but it’s a fine addition to their catalog.

NOTES & MINUTIAE: Between albums, Million and Mercer played with several bands in the NYC / NJ area in several permutations.

IS THERE A DELUXE VERSION: Some extra covers and a live track.

GRADE: A-: Solid, and restrained, and definitely 1986 college radio with a calm twist.

OTHER SONGS YOU MAY KNOW: They cover a Beatles track

WHAT’S IT ALL ABOUT: An anachronistic record for the punk-rock era, emphasizing percussion and jangling, clean guitar sounds. It became very influential as time went on.

SOME WORDS, PHRASES AND CLAUSES ABOUT THIS RECORD: One thing you notice about this album is the silence. You wonder if the track has really started, or if there’s a problem with the disc or the stream. But the silence and the space, the fade-ups and then the onslaught of percussion and jangle all work well in setting up and relieving tension through the album.

The Feelies’ debut was really kind of out there for the time. Lots of drums and percussion with clean and complex rhythms, guitars that emphasized chords and progressions instead of power barre chords, and songs with obtuse lyrics and references. But anachronism was more punk than what had become of punk rock at that time, though the Feelies would never be considered a punk rock band.

REM was very influenced by this album, along with other like-minded New Wave stars of the 80’s. It was never destined to sell, but to this day those that know and get it, love it.

NOTES & MINUTIAE: Keith DeNunzio was originally credited as Keith Clayton on the album.

IS THERE A DELUXE VERSION: Yes, a couple of live cuts and b-sides from later incarnations of the band.

GRADE: A: None of the songs are straightforward, but all get to where they need to go.