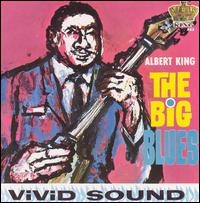 TITLE: The Big Blues
YEAR RELEASED: 1962
CHART ACTION: None
SINGLES: I Walked All Night Long, Don’t Throw Your Love on Me So Strong (#14 R&B), Travelin’ to California, I Get Evil, This Funny Feeling
OTHER SONGS YOU MAY KNOW: Blues fanatics may have heard Let’s Have a Natural Ball
LINEUP: Albert King + session players
WHAT’S IT ALL ABOUT: Singles from Bobbin and King Records fill this album, put together after his first R&B hit. The voice and guitar you recognize but the arrangements are definitely not like his Stax work.

SOME WORDS, PHRASES AND CLAUSES ABOUT THIS RECORD: Like many bluesmen in the 50’s, Albert King recorded singles, lots of singles. In between touring on the blues circuit, King cut several tracks for Bobbin and later King Records with limited success until “Don’t Throw Your Love on Me So Strong” hit the charts. Thus, the need to compile this album.

On these sides, his distinctive playing on his Flying V guitar are noticeable, along with his smooth voice. He wrote most of the material and those songs are decent. What I don’t like are the arrangements. I’m not a big fan of the horn-based blues sound, and the production is very 50’s. It’s not my personal cup of tea, especially with an artist like King whose guitar should speak volumes.

However, the record is strong enough so that if you DO like this style of blues, you should listen to it for sure. I am keeping most of it, because it’s Albert King’s guitar, you know.

NOTES & MINUTIAE: He was a lefty, but mostly played a right-handed strung guitar. He also never played the sixth string.

GRADE: B: Even though it’s not my personal taste in the blues, it IS Albert King and you can hear his guitar and voice do the magic..