OTHER SONGS YOU MAY KNOW: Sleep Forever

WHAT’S IT ALL ABOUT: Second album from NYC alternatives builds on their strengths – Mary Lorson’s voice and Billy Cote’s songcraft.

SOME WORDS, PHRASES AND CLAUSES ABOUT THIS RECORD: The second Madder Rose album got them noticed in alternative circuits here in the US, thanks to the combination of Mary Lorson’s voice (gentle yet powerful at times), and the songwriting and arrangements of Billy Cote, the guitarist.

Cote’s guitars wash all over the tracks, in some ways like the UK shoegazers, but Lorson’s vocals bring that back up, and Cote also adds in some interesting guitar flourishes above the noise. The band also has improved their chops at slower song (such as “Car Song”).

This album pointed Madder Rose to a path that was both pop-oriented and alternative, which was sorely needed at the time. This album still holds up as a good example of the variety found, but not noted by the press, in the 90’s.

NOTES & MINUTIAE: The band had 10 days to rehearse these tracks before heading into the studio after a long tour.

GRADE: A-: A good collection of pop melodies intermixed with guitar swirl that should have made more of an impact commercially. 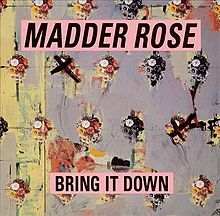 TITLE: Bring It Down
YEAR RELEASED: 1993
CHART ACTION: None
SINGLES: Beautiful John, Swim
OTHER SONGS YOU MAY KNOW: John Peel liked them, so if you were listening to his show in the UK in 1993…
LINEUP: Billy Cote, Mary Lorson, Kevin Salem, Matt Verta-Ray, Brian Doherty, Johnny Kick
WHAT’S IT ALL ABOUT: NYC band uses distorted guitars and melodic vocals that aren’t mixed up front to create – well something similar to shoegaze.

SOME WORDS, PHRASES AND CLAUSES ABOUT THIS RECORD: Madder Rose was the product of a mutual friend who hooked up Cote and Lorson after Cote had written some songs and Lorson was looking for a new band. They got together and formed Madder Rose, and quickly found footing to record this album in 1993.

It’s kinda shoegazy, a little hazy, and Lorson’s vocals aren’t mixed up front, which of course is just like shoegaze. However, there’s a little more variety here than the typical band of that ilk. Cote and Lorson’s songs have variety and some different textures at time. Cote doesn’t always wash the songs in distortion, which is a relief.

They still sound a bit tentative here – trying to figure out a mutual direction. They had three different drummers on this project. It’s pretty solid, though, if you enjoy distorted guitars and a little haze on your melody.

NOTES & MINUTIAE: They were big in the UK underground, and Atlantic wanted to sign them immediately, but Lorson turned that down at first. They signed for their second album, which is why this album was so hard to find.

GRADE: B+: It’s a pretty good early 90’s record, nothing ultra-special but I like Lorson’s voice and Cote’s guitar work.