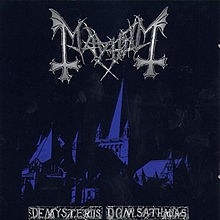 OTHER SONGS YOU MAY KNOW: Well, probably now thanks to documentaries and books and such

WHAT’S IT ALL ABOUT: Infamous Norwegian black metal album featuring a murderer and his victim.

SOME WORDS, PHRASES AND CLAUSES ABOUT THIS RECORD: Mayhem caused same in Norway in the 90’s, with a suicide (a photo of the aftermath later became an album cover), a link to church burnings, and well, murder. Count Grisnackh (Varg Vikiernes) stabbed bassist Euronymous (Oystein Aarseth) during a dispute. They put the album out that they recorded anyway, because, metal.

As for the music, it’s an influential black metal album with creepy distorted vocals from Atilla Csihar (formerly of Tormentor), and sheets and sheets of riffs from Euronymous. Hellhammer (Jan Axel Blomberg) drums in the usual double-kick fashion. The drawback is that the songs are long, and don’t go much of anywhere.

I can see why this is influential despite the notoriety – the riffs are mega-normous and the basswork from Vikiernes is stellar. But, it seems like it’s all one song.

NOTES & MINUTIAE: The original singer of the band, who went by Dead, killed himself. Along with the photo, Euronymous took pieces of his skull and made necklaces for the members of the scene. That’s metal, man.

GRADE B: Individually, the songs work, but they just bend together. I EXILED it because it’s just too too same same.