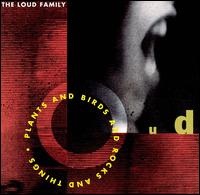 TITLE: Plants and Birds and Rocks and Things
YEAR RELEASED: 1993
CHART ACTION: None
SINGLES: Take Me Down
OTHER SONGS YOU MAY KNOW: Nope.
LINEUP: Scott Miller, Jozef Becker, R. Dunbar Poor, Zachary Smith, Paul Wieneke.
WHAT’S IT ALL ABOUT: After the too-often ignored Game Theory petered out, Scott Miller forms this band which is more guitar-oriented power pop. There are hooks everywhere, but still it was rather ignored.

SOME WORDS, PHRASES AND CLAUSES ABOUT THIS RECORD: Scott Miller (RIP) was a music fiend, an excellent writer and critic, and unfortunately out of the mainstream even though his music was clever and inventive.

The Loud Family’s modus operandi are hook-based power pop songs with literate lyrics and snarky titles. Several cuts are linked by sound collages or inventive snippets, and the titles, such as “Self Righteous Boy Reduced to Tears”, “Ballad of How You Can All Shut Up” and “Some Grand Visions of Motives and Irony” are examples of Miller’s literacy and humor.

This is smart music written by someone who probably was too smart to make rock music, and thus was no doubt doomed to semi-obscurity. You could do worse than giving this a spin.

NOTES & MINUTIAE: As you may have guessed, the title is from “Horse with No Name” by America.

GRADE: A-: This is probably how I’d approach writing songs, in all honesty. I’d no doubt want to put my ten dollar words and concepts in them.