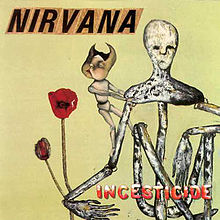 TITLE: Incesticide
YEAR RELEASED: Compilation
CHART ACTION: #39 US, #14 UK
SINGLES: Sliver (#90 UK)
OTHER SONGS YOU MAY KNOW: Dive, Stain, Benn a Son, Polly
LINEUP: Kurt Cobain, Krist Novoselic, and either Dave Grohl, Chad Channing, Dale Peters or Dale Crover
WHAT’S IT ALL ABOUT: Odds and ends release between their two major label releases has some essential tracks and some odds and some ends.

SOME WORDS, PHRASES AND CLAUSES ABOUT THIS RECORD: Ah, the rarities record. Bands, especially now, have a lot of B-sides, EP cuts, cuts to charity records, etc. that are released but hard to find. So instead of box sets coming out when the group is gone, many artists now release these to tide over fans during a hiatus.

Nirvana being Nirvana, people were scrambling for any product they could find. They had released some singles and EPs to bolster foreign tours before things went insane, and had recorded a couple of B-sides, oddities and tracks for compilations that were now floating around everywhere. So DGC grabbed some and made some money, honey.

It definitely is an odds and ends collection. The first four cuts are killer, and the covers of Devo and the Vaselines are inspired. But as it goes on you know why some of these were in the can. The fast version of Polly takes away from the poignancy, and some seem incomplete.

NOTES & MINUTIAE: Five tracks were from their original demo tape made in 1988.

IS THERE A DELUXE VERSION: No. The box sets have supplanted this, but it’s a decent value proposition

GRADE: B-: Stop it after six or seven cuts and its great. Then…odds and ends time where you pick tracks at your peril.

OTHER SONGS YOU MAY KNOW: Rape Me, Dumb

WHAT’S IT ALL ABOUT: The follow-up to Nevermind is less radio-friendly, more aggressive, controversial, and sadly, the final studio album for Nirvana.

SOME WORDS, PHRASES AND CLAUSES ABOUT THIS RECORD: Just reading about all of the controversies and issues surrounding In Utero makes you wonder if being an artist that becomes massively popular is worth it.

To wit: the record company didn’t want them to record with Steve Albini – didn’t like the results and said it so much the band finally caved and had the first two singles remixed for radio, and frankly they don’t sound much different. Meanwhile, the song “Rape Me” got them banned at Wal-Mart so they changed it to “Waif Me” (whatever the fuck that means, pardon my French), the cover was controversial, and the newbie fans were confuzzled by the aggressive music of the deep cuts.

If this album were the follow-up to Bleach, everyone would love it and acclaim it a big step forward. Alas, it was not, so the album get lost in the Nirvana myth and story.

It’s a great album. It’s got pop-punk songs, noise-punk songs, and the lyrics definitely are from a man on the edge. And if you’re ever pissed at someone, crank up the loud, radio-unfriendly cuts and give them a what for.

NOTES & MINUTAE: This album was recorded in a studio in Cannon Falls, Minnesota. I’ve been through there a few times and I had no idea there was a studio there. You really can’t get in trouble in Cannon Falls.

IS THERE A DELUXE VERSION:  Yes. A super-deluxe, as is standard, with the standard different mixes, outtakes, etc. You do get the Albini mixes for the singles, though.

GRADE: A. I forgot who great of an album this really is until I re-listened to it. It’s not polished or shiny but it’s damn good.

SOME WORDS, PHRASES AND CLAUSES ABOUT THIS RECORD: How can you review an album that almost everyone has heard, and has formed opinions about? I guess as straightforward as possible.

Yes, it’s as good as everyone thinks it is. Yes, it’s more polished and professional and radio-friendly than any other ‘grunge’ record would be – at least as any Sub Pop or K or Kill Rock Stars record would be at the time. That doesn’t take away from the hooks, the songs, the power behind them, or the emotion poured into them.

However, it is not perfect. A few of the songs sound very similar, though good sequencing splits most of them apart (some back-to-back ones make you wonder if it was one track or two, at least to my ears). And a couple of tracks seem to be loud and obnoxious just for the sake of it. Now, that’s OK to shake up the poseurs, but it detracts from the overall quality to be honest.

NOTES & MINUTIAE: Chad Channing, the former drummer, came back to play cymbals on “Polly”. I—I did not know that!

IS THERE A DELUXE VERSION: Yes, a couple – including a Super Deluxe with demos, live recordings, etc.

GRADE: A: So close to an A+, still one of the premiere albums in the rock-and-roll era. 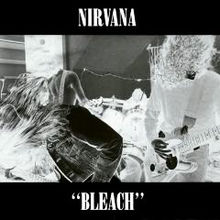 CHART ACTION: #89 US, #33 UK (All on re-release in 1992)
SINGLES: Love Buzz
OTHER SONGS YOU MAY KNOW: Let’s see: not at the time, but now About a Girl at the very very least.
LINEUP: Kurt Cobain, Krist Novoselic, Chad Channing
WHAT’S IT ALL ABOUT: Realtively unknown Seattle-area trio records album for $606.17 for release on Sub Pop and hopes for the best.

How grungy? A song like “School” or “Negative Creep” would definitely fit right next to Mudhoney or Tad. At the time, that sound was Seattle’s little secret, where only those in the know, knew, and the rest of the punters were singing along to Warrant and Cinderella.

Cobain’s guitar work is versatile – loud and riff-tastic when needed, but complex and gentle when called for. Novoselic’s bass fits right in with Cobain’s guitar. Kurt’s vocals are more on the shreddy side than singing side.

Bleach is not just notable for who the band is, but as a stand-alone piece of Seattle grunge. That’s OK in and of itself. The songwriting is kind of lazy at times – just a simple riff and simple screaming of simple lyrics. Still, you can crank it and scare the neighbors if you want.

NOTES & MINUTIAE: “Love Buzz” was originally done by the Shocking Blue – the same group that hit big with “Venus” in the early 70’s

IS THERE A DELUXE VERSION: Yes. A live set from that era is appended onto it. The outtakes and B-sides all wound up on Incesticide for the most part.

GRADE: B+: A great first step to become NIRVANA, yet it’s good as a regular record.