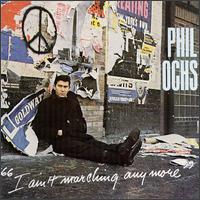 SINGLES: None from here, but the title track was a 1966 single with an electric version.

OTHER SONGS YOU MAY KNOW: Draft Dodger Rag, Links on the Chain, Here’s to the State of Mississippi

WHAT’S IT ALL ABOUT: Phil Ochs takes the protest singer crown away from Bob Dylan with biting songs about Vietnam, the draft, civil rights, President Kennedy, liberal complacency, and interpretations of poetry he found compelling.

SOME WORDS, PHRASES AND CLAUSES ABOUT THIS RECORD: With a clear voice, and a sense of righteous purpose, Phil Ochs’ second album is an indictment of the state of the world in 1965. Vietnam, the draft, civil rights, and even suburban liberals are all targets for his work. He sang loud and clear and rallied the protest community behind him as Dylan was moving more towards rock and enigmatic visions.

Ochs was not afraid to challenge his listeners, as he wasn’t as doctrinaire as some on the left wanted him to be. In this, he had some realistic expectations of what could and couldn’t be accomplished, but he still was an idealist and sang about the injustices of the 60’s, which were myriad and deep.

Ochs was now the leader of the protest-folk movement, especially with songs like “HEre’s to the State of Mississippi”.

NOTES & MINUTIAE: “That Was the President” was about Kennedy, and it infuriated some Marxists and Socialists in his audience. Ochs didn’t care, really.

IS THERE A DELUXE VERSION: Yes, the ‘electric’ version of “I Ain’t Marching Anymore”. It’s not as successful as it could have been.

GRADE: A+: Probably the best protest album of the 60’s outside of Dylan, and maybe right alongside Dylan’s best. 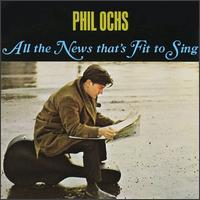 TITLE: All the News That’s Fit to Sing

OTHER SONGS YOU MAY KNOW: One More Parade, Power and the Glory, The Bells, Too Many Martyrs, What’s That I Hear

WHAT’S IT ALL ABOUT: The first broadside from one of Broadside magazine’s favorites.

SOME WORDS, PHRASES AND CLAUSES ABOUT THIS RECORD: Sure, this 1964 record is topical, and reads like a current events look at America during that troubled and turbulent time. Because of that, it’s an important document – a take on current events from a progressive voice that takes on the issues head-on.

Ochs’ voice is strong and unwavering, and his vocal style fits each style of song, from talking blues, to protest, to ‘journalism’ folk. His guitar work has a lot of finesse and he can play in several styles to fit the song. His lyrics are definitely pointed, and unwavering on his politics. The only slight stumbles are when he tries to become a bit sentimental – he’s not quite as nuanced there as he would be later.

Ochs is a better singer, and a better guitar player than most other of his contemporaries. His political leanings were far left, but in the protest movement, he was beloved at this time.

NOTES & MINUTIAE: In 1963, he recorded an album of campfire songs for children, anonymously. This wasn’t discovered until 2000.

GRADE: A:  Sadly, you could probably adapt many of these songs to the current political landscape.