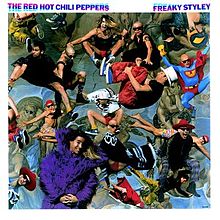 TITLE: Freaky Styley
YEAR RELEASED: 1985
CHART ACTION: None
SINGLES: Jungle Man, Hollywood (Africa)
OTHER SONGS YOU MAY KNOW: Catholic School Girls Rule, If You Want Me to Stay
LINEUP: Flea, Anthony Kiedis, Hillel Slovak, Cliff Martinez
WHAT’S IT ALL ABOUT: Second album from the punk-funksters is somewhat an improvement of their first, at least in terms of sound.

SOME WORDS, PHRASES AND CLAUSES ABOUT THIS RECORD: Changing guitarists (back to the original Slovak in place of replacement Jack Sherman), and changing producers (George Clinton did the honors), the second RHCP album sounds better, as Clinton can at least mix their funk-punk vision properly.

The issue, this time, is songs. Many are puerile junior-high level sex jokes that were funny when you were a teenager, but are cringeworthy now. Their cover of Sly Stone’s “If You Want Me to Stay” is nice, but it’s almost a copy from the original. Same with “Hollywood (Africa)”, which is just “Africa” by the Meters with new lyrics.

The only originals that shine are the vamp “Freaky Styley” (it has a great groove) and “Yertle the Turtle”. Towards the end of the album they have a couple of absurdly short pieces that really could have been left off for the extended version of the title track, where Slovak burns the studio with his guitar.

They had the sound, now they just needed the songs.

NOTES & MINUTIAE: Even though Slovak plays on the record, most all of the original songs list Sherman as a co-writer.

IS THERE A DELUXE VERSION: Yes, some remixes and demos.

GRADE: B-: Good grade for the sound, but more care should have been given to the songs. 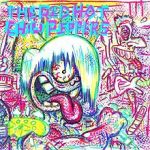 TITLE: Red Hot Chili Peppers
YEAR RELEASED: 1984
CHART ACTION: #201
SINGLES: Get Up & Jump, True Men Don’t Kill Coyotes (Video only)
OTHER SONGS YOU MAY KNOW: Out In LA
LINEUP: Anthony Kiedis, Flea, Jack Sherman, Cliff Martinez.
WHAT’S IT ALL ABOUT: Funk rock pranksters first album came after a seismic lineup change, and suffers from half-assed songs and horrible production. Other than that…

SOME WORDS, PHRASES AND CLAUSES ABOUT THIS RECORD: The start of the RHCP odyssey was tangled. Originally this was a side and demo project among friends, and Hillel Slovak and Jack Irons had a full time gig in another band. So when that band got signed, they left. The Peppers got a deal, too. So Flea and Kiedis found Sherman and Martinez and finished writing their debut in a rush.

Andy Gill, from the great Gang of Four was enlisted as producer. I don’t know what he was doing but this album sounds mechanical, tinny and flat. That’s even with a remaster. I remember the first time I heard this – there was no warmth or depth that you expected from the RHCP. Plus the songs just weren’t up to scratch. Thankfully, they got better.

NOTES & MINUTAE: The band Slovak and Irons were in, What Is This?, only released one album, a live EP and a regular EP. Slovak was back in the RHCP fold in 1985 and Irons in 1986.

IS THERE A DELUXE VERSION: Yes, with the five demos that the original band cut.

GRADE: C : It’s not abjectly awful, and a couple of cuts are good, but I think I’m being generous with a C.