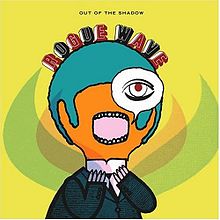 TITLE:  Out of the Shadow

OTHER SONGS YOU MAY KNOW: Kinda obscure, this one is.

WHAT’S IT ALL ABOUT: Pleasant and cerebral indie band has some tuneful moments.

SOME WORDS, PHRASES AND CLAUSES ABOUT THIS RECORD: Rogue Wave has placed lots of songs on soundtracks and compilations. They seem to be a go-to band for a director if they want a band that’s indie, but not one so indie that it’d scare away the paying customers.

This is due to their style, which is in full effect. They’re tuneful, have some quirky things they do with meter, harmony and song construction, but they’re not brash or atonal about it. Plus, they use harmonies and have smart lyrics.

This didn’t seem like a debut album, but it also was one that just loped along for me while I did work. That may be another reason directors like them – they’re fairly unobtrusive.

NOTES & MINUTAE: Zach Rogue (nee Schwartz) was a dot-com employee but lost his job in the burst in 2001. So why not start a band?

IS THERE A DELUXE VERSION:  No.

GRADE: B: Nothing really wrong about it. You may hum a melody or two afterwards.