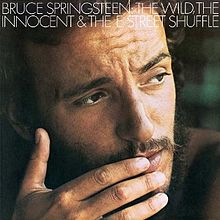 SOME WORDS, PHRASES AND CLAUSES ABOUT THIS RECORD: Springsteen’s second album finds himself consolidating his efforts into long (and long-winded) story-songs that were in the motif of his better songs on the debut album. The shortest track clocks in at 4:31 and the longest at almost 10 minutes.

This is an album you have to invest in – except for “Rosalita” there’s no songs with a lot of hooks and immediacy. These are songs you need to take time to work through and explore. They all shift around – tempos, moods, keys. Some of the songs, still, seem a bit too long to wind through the plot and the changes. He still needed an editor at times.

This is more of a rock-and-roll album than his previous effort, but still there are many other influences, especially the storytelling of Dylan and Paul Simon. The arrangements (only one guitar, accordion and saxophone all over the place) are also not quite full-on-rock and roll. It’s a transitional album for an artists that will soon find his sweet spot.

IS THERE A DELUXE VERSION: No, but some outtakes are on other Springsteen collections.

GRADE: B+: Some of the sprawling songs are just a bit too sprawly, but this is still a good addition to any collection.

TITLE: Greetings from Asbury Park, NJ
YEAR RELEASED: 1973
CHART ACTION: #60, #41 UK
SINGLES: Blinded by the Light, Spirit in the Night
OTHER SONGS YOU MAY KNOW: Growin’ Up, For You, It’s Hard to Be a Saint in the City
LINEUP: Bruce Springsteen, Clarence Clemons, Vini Lopez, David Sancious, Garry Tallent, Harold Wheeler
WHAT’S IT ALL ABOUT: Debut record for a singer / songwriter / rocker from New Jersey that got some acclaim at the time but not much action on the radio. It was wordy, you know.

SOME WORDS, PHRASES AND CLAUSES ABOUT THIS RECORD: Bruce Springsteen and the E Street band’s first album is an at time rambling affair that doesn’t know quite where it’s going. That’s understandable, since at first the album tracks were split between basically solo Springsteen and band cuts, until label boss Clive Davis wanted a couple of singles on the album

The addition of “Blinded by the Light” and “Spirit in the Night” definitely upped the quality factor. They were both excellent songs and its surprising they weren’t considered in the first place. Elsewhere, Springsteen spins tales in a most loquacious manner, as if he were paid by the word with a bonus for an interesting rhyme scheme.

The backing by this version of the E Street band is a bit sparser. Clemons isn’t available for all of the cuts, so you do mix his saxophone colorings. I found that there is a big difference between the best cuts and the so-so cuts. There are some early masterpieces here; you work around the rest.

NOTES & MINUTIAE: The three songs excised from the album for the singles haven’t been released, officially. The band on the two singles was just Springsteen, Lopez and Clemons since Sancious and Tallent had other commitments.

GRADE: B+: More hits than misses. Not a complete album, yet, but you could tell he had some great music in him.