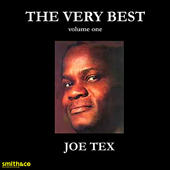 WHAT’S IT ALL ABOUT: Great collection of underrated soul singer from 1964-68.

SOME WORDS, PHRASES AND CLAUSES ABOUT THIS RECORD: Joe Tex had recorded 30 or so singles with only one song even sniffing the charts (at #102), but his record company embarked on a distribution deal with Atlantic Records, and Tex went down to Muscle Shoals to record some tracks. The result was “Hold What You’ve Got”, which set the Tex formula for the first few singles – impassioned singing, impassion spoken word pleading, excellent backups.

Tex, who also was a songwriter as well as singer, changed his approach after a while and made some more contemporary soul tracks that became huge hits, with hot backing tracks, horns and his impassioned, pleading vocals.

As you can see above, Tex made a lot of appearances on the charts. There’s a second volume of hits covering the last part of his career, and when that comes up these two albums together will present a great portrait of an underrated artist.

NOTES & MINUTIAE: Tex was involved in a feud with James Brown which started in the 50’s and escalated through the 60’s.

GRADE: A-: While the pleading, singing style does seem out of date, his talent definitely is not and should be remembered.