OTHER SONGS YOU MAY KNOW: Not around these parts

WHAT’S IT ALL ABOUT: Second album from UK band becomes a NWOBHM classic and showed the commercial potential of that genre in the UK.

SOME WORDS, PHRASES AND CLAUSES ABOUT THIS RECORD: Saxon’s second album was a revelation to the UK music business. It hit #5 and spun off two singles, showing that the New Wave of British Heavy Metal could be a commercial force.

The album is full of riffs, guitar interplay, melodic solos, driving tempos – you know, the usual NWOBHM menu. Not only do they have riffs and guitars all over the place (the title track riff – my goodness), they also can write hooks on occasion.

A lot of the record is at a quick tempo, but I think the detriment of singer Biff Byford. His high-pitched vocals don’t have a lot of power when he’s got to sing ultra fast. When he slows down a bit, his vocals really work, and that’s why “747 (Strangers in the Night)” is such an effective track.

I can see why this was a hit in the UK – the US music industry didn’t have the machine to bring this out to the general public, so it became a underground metal community gem.

NOTES & MINUTIAE: “747 (Strangers in the Night)” was written about the Northeast Blackout in 1965 and how a Scandanavian airliner had to land in the dark.

IS THERE A DELUXE VERSION: Yes, demos and live cuts and a b-side

GRADE: B+: One of the hard-to-get albums (in the US) that kick started the tape-trading era of metal, which then developed into a full-out metal scene. 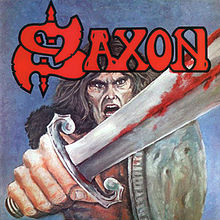 SINGLES: Big Teaser, Back to the Wall

OTHER SONGS YOU MAY KNOW: If you’re a NWOBHM junkie, maybe

WHAT’S IT ALL ABOUT: First album from British heavy metal band finds them finding their way in the studio.

SOME WORDS, PHRASES AND CLAUSES ABOUT THIS RECORD: Debut albums are sometimes tentative first steps that only show glimmers of what the band would become. The debut from Saxon is one such album.

While there’s plenty of decent riffs, and rockin’ out, the band, the label, the producer, everyone was at a crossroads on where they’d ultimately wind up. There’s a dash of prog, some glam and some reg’lar 70’s metal. It’s all a stew, which no doubt was a product of their influences at the time.

However, this is still a decent metal album. Those who know later Saxon may be puzzled at a few tracks, but there’s still enough here to recognize this as Saxon, and see this as a first step toward what they’d become to UK metal heads.

NOTES & MINUTIAE: Their original name was “Son of a Bitch”

IS THERE A DELUXE VERSION: Yes, demos and BBC sessions

GRADE: B-: It’s not the perfect metal album, but it’s a decent precursor to NWOBHM.