TITLE:  A Woofer in Tweeter’s Clothing

OTHER SONGS YOU MAY KNOW: A cover of Do Re Mi

WHAT’S IT ALL ABOUT: Second album from the ahead-of-their-time weirdo rock band didn’t get them a foothold in the US, but allowed them to tour the UK.

SOME WORDS, PHRASES AND CLAUSES ABOUT THIS RECORD: Even though their first album stiffed in the marketplace (even with after the re-release with the new band name), the band led by the Mael brothers got a second album to display their odd pop/rock/progressive sensibilities.

They went back to music hall, vaudeville, and Broadway at times with their arrangements and melodies but then at times change from that to ‘standard’ rock on the turn of a dime. Russ Mael’s voice, high and operatic at times, tends to dominate the proceedings when singing, and some had trouble with it. There’s a lot of orchestration, which in juxtaposition to the weirdness is even more unsettling.

So who would like this record? Weirdos, probably. Seriously, there’s some interesting stuff here but it’s not for everyone.

NOTES & MINUTIAE: They went to the UK, and became well known for standing up to hecklers on stage and TV.

GRADE: B-: Nothing here is really outstanding, but there’s interesting items and I’m not exiling any of it.

YEAR RELEASED: 1971
CHART ACTION: None
SINGLES: Wonder Girl (#112)
OTHER SONGS YOU MAY KNOW: Only fans.
LINEUP: Russ Mael, Ron Mael, Earle Mankey, Jim Mankey, Harley Feinstein
WHAT’S IT ALL ABOUT: Odd, before their time band release an odd, before their time debut record to crickets (except for Alabama, where “Wonder Girl” hit, for some reason.)

SOME WORDS, PHRASES AND CLAUSES ABOUT THIS RECORD: The Mael brothers formed this band in the late 60’s, and they weren’t content to make either the psychedelic bubble gum music or the acid-rock. They just went to their gut and wrote a bunch of songs that were odd and strange, probably influenced by Syd Barrett and Frank Zappa more than anything.

Todd Rundgren loved them, and produced their debut after convincing his record label to sign them. What they delivered was a mix of several styles and genres, some which sound like late 70’s new wave, some that sound like hard rock of the mid-70’s and some that are just weird. Russ Mael’s high pitched vocals, reaching into falsetto more often than not, is the one element that’s pretty consistent track to track. It is an inconsistent record, with some tracks just head scratchingly odd and others for fans only. Some of the songs are endearing, though. 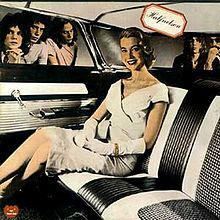 Originally they were named Halfnelson and the band changed it to Sparks after their record company thought it would be like “The Marx Brothers” or something. A year after the debut is when they made the change, and the record company duly rolled out the album again and named it Sparks.

NOTES & MINUTIAE: The original cover is from an old automobile ad that they had in their rehearsal space, and they just added the band around the windows.

GRADE: C+ I really like a couple tracks, but I exiled some and I really do believe you have to be a serious Sparks fan to really enjoy this