OTHER SONGS YOU MAY KNOW: Calypso

WHAT’S IT ALL ABOUT: The breakthrough record contained the hit, the novelty which later became a signature, and solid folk rock.

SOME WORDS, PHRASES AND CLAUSES ABOUT THIS RECORD: The tracks on this, the second Suzanne Vega full-length, were written during the 80’s and polished in the studio by the backing band. The musicians added a great deal of depth and adventure to the tracks, which helped this albums overall mood.

Vega’s warm alto is mixed well with the backing, and the lyrics and melody work for the songs and arrangements. Foremost is the title track, with its twists and key changes, and the big hit “Luka” which is a big-sounding song that is intimate as well.

“Tom’s Diner” was the out of left field hit – an acapella version became the basis of remixes and another album entirely. But here, it fits in well as an opener and as an instrumental coda to one of the best folk albums of the 80’s

NOTES & MINUTIAE: They tried to figure out the day Vega wrote it or was referencing, and the best guess is most of it was November 18, 1981.

GRADE A: An interesting folk album deeper than the hits and novelty. 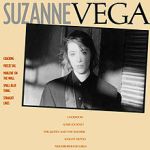 SOME WORDS, PHRASES AND CLAUSES ABOUT THIS RECORD: Vega’s journey to a recording contract sounded like it should be a 60’s thing, not the 80’s, complete with the folk clubs and anthology magazine / song clearinghouse. However, instead of woman with guitar and voice only, Vega’s debut has a (then) contemporary feel with some wonderful arrangements. Producers Lenny Kaye and Steve Addabbo add just the right touches to the songs whether its simple keyboards, electric violin or a full band.

Vega’s strength, of course, is songwriting, and even at this point in her career she was writing beautifully complex songs that sound simple and straightforward.

This album got a lot of hype amongst critics and was a sleeper hit in the UK thanks to the video for Marlene on the Wall. It definitely is worthy of the hype.

GRADE: A- : Great debut with fitting songs and arrangements.