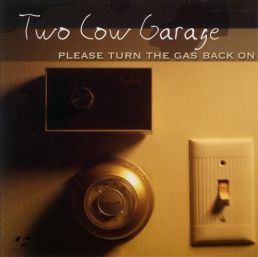 TITLE:  Please Turn the Gas Back On

OTHER SONGS YOU MAY KNOW: No, unless you saw them live. They tour relentlessly.

WHAT’S IT ALL ABOUT: Hardscrabble, gruff alt country blends a lot of influences but makes their own sound.

SOME WORDS, PHRASES AND CLAUSES ABOUT THIS RECORD: There’s some Uncle Tupelo, a bit of Drive By Truckers,  a bit o’ Blue Mountain, a smattering of Ass Ponys and a pinch of the Bottle Rockets. But this record – it turns into Two Cow Garage.

Micah Schnabel’s voice sounds like he’s 40 and smoked three packs of Luckies a day, but he’s a young whippersnapper (at least in 2002). The band is raucous at times, but their use of a pedal steel and fiddle at times helps soften the coarseness.

The stories and songs talk about what seems like a regular alt-country theme – living in a dying small town and trying to figure out what’s going on besides drinking and trying to get laid, and then how to get outta there. Good stuff, especially for small town kids.

NOTES & MINUTIAE: During the tour to support this record, the band traveled 300,000 miles. Yikes!

GRADE: A-: If you pinch good parts from all of your influences, it’s not derivative. This sounds fresh and new, even though you’ve heard parts of it before.